This web page is now maintained at http://herpolhode.com/rob

Rob Pike, well known for his appearances on ``Late Night with David Letterman'', is also a Member of Technical Staff at Bell Laboratories in Murray Hill, New Jersey, where he has been since 1980, the same year he won the Olympic silver medal in Archery. In 1981 he wrote the first bitmap window system for Unix systems, and has since written ten more. With Bart Locanthi he designed the Blit terminal; with Brian Kernighan he wrote The Unix Programming Environment and

The Practice of Programming. A shuttle mission nearly launched a gamma-ray telescope he designed. He is a Canadian citizen and has never written a program that uses cursor addressing.

Bibliography in bibtex format or in html format .
Also, many of my papers are available as part of the Plan 9 document set, which you can explore here.
Some older stuff is available from a local archive.

Much of time is spent working on the Plan 9 distributed operating system.

A paper with Phil Winterbottom about the Inferno virtual machine may be found here.

The PostScript slides for my talk, "Systems Software Research is Irrelevant", may be found here, or as PDF here.

The PDF slides for my talk, "An Introduction to Quantum Computation and Communication" may be found here.

In the mid-1970s, The Toronto Centre of the Royal Astronomical Society of Canada sponsored some research into light pollution, the brightening of the night sky by artificial illumination. Some of the material from that project, most significantly a pair of papers by Richard Berry and myself, are collected here.

A Unix implementation of Newsqueak may be found here.

Notes from a course called "Construction of Concurrent Systems Software" are available here: Lecture 1, Lecture 3, Lecture 5. (Even-numbered lectures were given by Sape Mullender, but the odd-numbered ones are comprehensible without them.)


Blit, the classic animated short about the windowing terminal project by Bart Locanthi and me. (Yes, it was necessary to explain how mice worked back then; this was 1982, two years before the Mac.)
Labscam, a record of Penn & Teller's visit to Bell Labs in November, 1989.
My Letterman appearance with Penn & Teller in May, 1990. 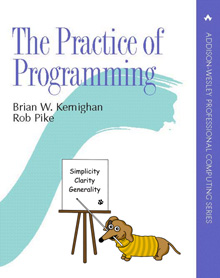